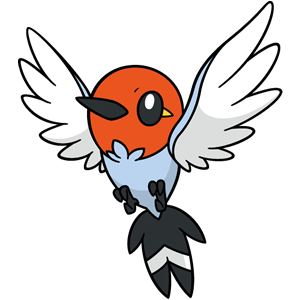 Revealed: Fletchling, along with Pancham, Gogoat, and Helioptile, was first revealed on May 11th within a leaked scan from the June 2013 issue of CoroCoro. It was officially revealed on the Pokemon website on 15th May. It's said to have a beautiful battle cry.

Additional Info: As described by Pokemon.com, "with a friendly nature and a beautiful chirp, Fletchling is a popular Pokémon among many Trainers. But Fletchling is also known to be ferocious in battle, capable of unleashing relentless attacks!"

X: These friendly Pokémon send signals to one another with beautiful chirps and tail-feather movements.
Y: Despite the beauty of its lilting voice, it's merciless to intruders that enter its territory.

Evolves into Fletchinder at Level 17. 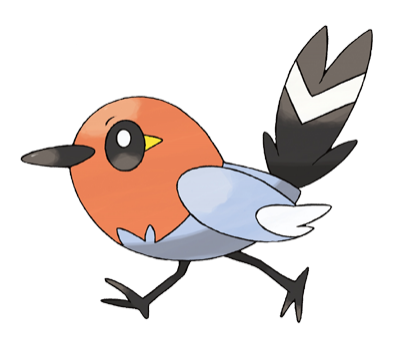 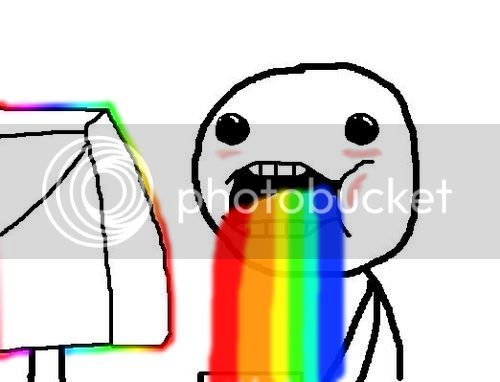 My least favorite of the revealed Pokemon, but it has potential. Maybe I'll like it when it evolves.

Welp, another Normal/Flying, but he can learn Flame Charge naturally, so that's something.

New early birdie go! While I'm not overly impressed with its design I must admit that this little birdie is following the trend in which certain Pokemon's 3D models look better to me than their artwork does. It actually looks rather cool in some of its battle shots (just need the better quality screenshots to properly judge it). Depending on what its evolutions look like and how they balance the line's stats, I could see Yayakoma growing on me.

I'll use this as long as it doesn't end up as shafted as the Pidove line(that is, having a good attacking stat but mostly learning moves of the other).

I am well aware this is about the size of a Robin, but it looks silly..
Sorry Magpie :L It just does.

Staff member
Moderator
I'm not sure what I think of this one... It's certainly better than last generations bird, and I don't hate it by any means, I guess it just depends what it evolves into. The English name doesn't suit a robin by any means, mind. xD

Aeolian said:
I am well aware this is about the size of a Robin, but it looks silly..
Sorry Magpie :L It just does.
Click to expand...

When it evolves into an epic firebird of epic doom it's coming for you!

I like it. If contests are in x and y, he's a sure- fire cuteness winner; but nobody sees a small concern I have. If this pokemons evolutions are similar to kanto, then will the evolution cycle be similar to spearow or pidgey? Also, will it evolve specially, taking advantage of friendship stats or the 3ds's gyroscope? And, my hope if this shows true to friendship evolution, will we finally be able to see friendship I a numeric value, so we can understand how close a friendly pokemon evolves?

It's cute and it's so tiny!

well yeah fletchling is kinda cool..... but i wish oh gamefreak i wish for a flying type with no normal type with it! come on atleast almost all types have a pure! (yannow a poke with just one type) and flying has no representative!

Staff member
Administrator
Tornadus and Sky Plate Arceus beg to differ (Although they are legendaries so they don't quite count, perhaps).

In any case, Fletchling loses its normal sub-type in favor of a fire-type upon evolution, so your argument is kind of invalid.

I don't think that's a very good Pokémon but... Meh!

StellarWind Elsydeon said:
Tornadus and Sky Plate Arceus beg to differ (Although they are legendaries so they don't quite count, perhaps).

In any case, Fletchling loses its normal sub-type in favor of a fire-type upon evolution, so your argument is kind of invalid.
Click to expand...

Although he did forget Tornadus, I believe that he was talking about Pokemon who are pure Flying types naturally (as in, without the need for an Ability, Held Item, or move that causes a Pokemon to change into a pure Flying type, as with Arceus and Kecleon, for example).

Anyway, I'm glad that they finally deviated from the normal pattern with the Fletchling line. In Gen I, they established two Normal/Flying lines that are available early on in the game, one with three Pokemon and one with two. I am, of course, referring to the Pidgey and Spearow lines.

Now, however, for the first time, they have deviated from it. The Fletchling line is available early on, and follows this pattern with the number of Pokemon, but now it is different from its predecessors because of the fact that Fletchling changes types from Normal to Fire past evolution, which I am glad for. Now, we get a Fire/Flying type who isn't a starter or Legendary, as well, which I gladly accept.

At least it evolves into a Fire and Flying type Pokemon :|

i am with u its sooo cute