Staff member
Administrator
To mark the switch to Nintendo's newest console, we're heading back to where it all started – Kanto. This thread is for chronicling your journey through the new Kanto – how far are you? What does your team look like, and how many gym badges have you collected?

Please try to avoid any late-game spoilers in this thread if possible. Thanks, and enjoy!

Tip: If you want to post types, try the [type]electric[/type] BBcodes. That'll produce something like this: Electric Obviously replace "electric" with whatever type you want. ^^

Okay so I'm almost at the Elite Four and this is what my team ended up looking like. I say ended up because I did decide to semi-nuzlocke this one in order to ensure that my team kept pace level wise with the gyms. Basically, I had to not catch Pokemon in order to keep the game balanced, and considering how much emphasis they place on catching Pokemon in this game, I don't consider that to be a good thing. Still, there's a lot of value to the game and I plan on going nuts shiny hunting soon. Null (Eevee): This guy is just completely ridiculous. I was kind of worried about feeling obliged to keep a Pokemon like Eevee or Pikachu in your party all game when they'd likely fall off pretty early, but ah... no. My Eevee is the tank of the party. I just set up whichever screens I need (while also doing damage because why the freak not combine reflect and light screen with a 90 base power damaging move, that's not broken at all!), then paralyze the opponent (yay for guaranteed paralysis 90 base power moves), and start recovering all my HP. It's pretty much impossible to break through without a fighting type move.
Nessie (Gyarados): I really don't understand why the game likes to pretend that the Magikarp you pay 500P for is a rip off. You just leave it in your party for a while and then boom, you've got a complete powerhouse. Admittedly it did take until I got the TM for Waterfall for this girl to start going, but once I did she just started destroying pretty much everything she came across.
Noctus (Gengar): I transfered this guy over from Pokemon Go actually. His nature is kind of terrible (adamant), but at the time I got him I'd sort of tried my hand at shiny chaining Gastly (to no success), so I had more than enough SpA candy to fix that. Plus it now means his sucker punches actually hit decently hard so that's cool.
Citrus (Dodrio): I'd just picked up another Doduo that I was planning on raising when a green flash ran by. As you can expect, I chose to raise the shiny. She's pretty good honestly, although most of the time she's just spamming Drill Peck, but more importantly she's really fun to use as a ride Pokemon. I like to just stand in the NPCs faces and show her off while they stand their stoically pretending they're not jealous of my shiny.
Laxus (Electabuzz): So right before I wandered into the Power Plant to get my ass handed to me by Zapdos since I was way too underlevelled for that fight, I picked up this guy. He's super fast, hits hard, and was higher levelled than everything else I had at the time so I kinda just had him stick around.
Strahd (Rapidash): I mean, he tries his best. He's not the greatest, but I don't have access to fire and ground moves (well, Nessie has earthquake but I'm not switching her into an Electrode anytime soon) on anybody else in the party so he helps out where he can.
Last edited: Nov 21, 2018

Staff member
Administrator
I finally got around to snapping some screenshots of my team, so it’s time that I posted in this topic!

I’m currently stationed just outside of Pallet Town on a small island on Route 21. I was previously catching Pokémon in the grassy patch of that route to level grind a bit (and caught Tangela and Victreebel for my trouble), then headed over to Route 23 to see what I could find now. I’ve done such a few times as I’ve been winning more and more badges. Ended up getting lucky and encountering wild Exeggutor, Nidoking, and Nidoqueen. ^^

After that I headed off to Route 17 (Pokémon Road) to farm some berries. It’s so nice having an easy source for berries when so many Pokémon are annoying to catch in this game - even with Ultra Balls! 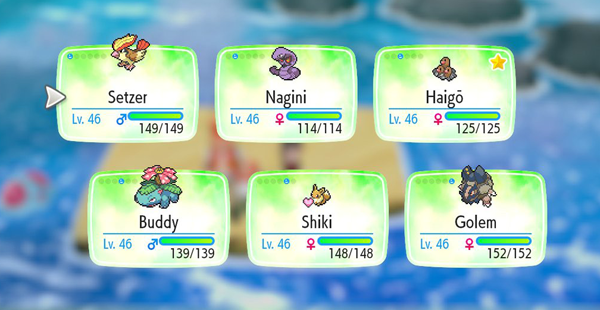 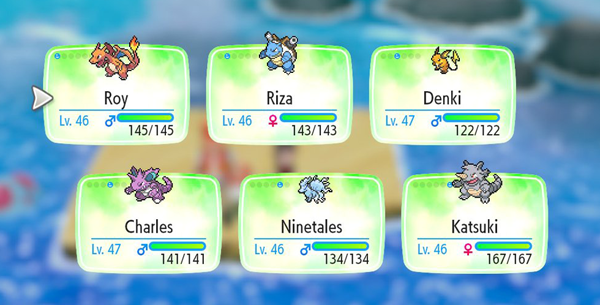 I’ve been training these 12 Pokémon for quite awhile now. I would've nicknamed my two Alolans if they hadn’t been traded, and @Demelza traded me my Rhyhorn (now Rhydon) because she’d caught one much earlier on than I could encounter them. :3

Originally I struggled with raising Nagini as an Ekans (kept getting KO’d by everything), but once she evolved and I gave her a few candies she was great. Balancing 12 Pokémon at once has never been easier thanks to the ability to swap your teammates around on the fly. I really hope that they keep that feature in for gen 8. ;-;

Final thoughts: the partner Pokémon are adorable but my gosh are they hax. XD
Last edited: Nov 25, 2018