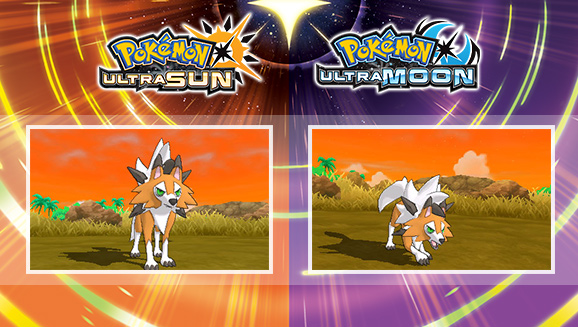 We don't know much about this form yet, except that it can't be encountered via "ordinary methods," like encountering it in the wild. This suggests that it's linked to some sort of event, whether in-game or external.

We're being promised more news about Lycanroc Dusk Form and Pokémon Ultra Sun and Ultra Moon in general "soon," so hopefully the hype train for the new games will start rolling at full speed, – we only have just over three months until the games release, and know virtually nothing about them...

As always, stay tuned to Pokécharms for all the latest Ultra Sun and Ultra Moon news as it happens!

This looks so cool! I would love to get my hands on one~!

Awesome! I just wish it was more Midnight-Style as well.

@GalacticGeckoMC Maybe there will be a dawn form as well which would look more like the midnight style.

This looks amazing! I hope this gets more competitive usage than the other forms.

@TeamPlasmaAdminLazuli Maybe, but I don't think so, if they were to have them both, why would they just keep the originals. Personally, I don't really like the Dusk form, but it's really cool. One of my favourite Pokemon are Midnight Lycanroc so I feel offended. i gona soo pokeymanz fur dis. (jk)

To be fair I'm glad we don't know much about the upcoming games, I think Sun and Moon spoiled way too much before their release. This new form looks amazing though!

@The Regal Omega If they don't reveal too much information, then it gives us something to be excited about. This new form for Lycanroc looks really good though!

I'm surprised by how ordinary it looks! I'm wondering if we'll get a Dawn form based on the Midnight model now too.

Keleri said:
I'm surprised by how ordinary it looks! I'm wondering if we'll get a Dawn form based on the Midnight model now too.
Click to expand...

The prevailing opinion right now is that we will, yes – the CoroCoro cover has something that looks vaguely Lycanroc-y, but is red (and not the Midnight form). Given the "Dusk" name, I'm inclined to believe we'll see a "Dawn" form that's more Midnight than Midday to match.

"Dusk" is how they chose to translate the Japanese word "たそがれ" - which can mean dusk, but it can also mean dawn, and is honestly better translated as "twilight". This thing is both dusk AND dawn. It is highly unlikely we have a fourth form coming - unless this thing is (also highly unlikely) going to be the 'shifts in body style from wolf to werewolf to Virgnia Woolf depending on time of day' that everyone and their goat wanted Lycanroc to be in the first place.

Which I'm honestly good with because this thing makes a good intermediate between the two existing forms and we honestly don't need ANOTHER one. This one is already kind of a "My Rockruff evolved during sunrise/sunset so it has traits of both its regular forms because I'm so speshul" that would get facepalms if it was written by fanfic-writers. XD


Which isn't helped by the fact it's been confirmed that Ash's Rockruff evolves into this new form in another anime fit of "Aw geez, we can't endorse one form over another, let's bail out by making a third form and giving THAT to the main character".


GalacticGeckoMC said:
Awesome! I just wish it was more Midnight-Style as well.
Click to expand...

There already is a Midnight Forme. They might do a Dawn Lycanroc though.
Last edited by a moderator: Aug 7, 2017

This form looks really cool. Rockruff and Lycanroc were added to my list of favorite Pokemon. I guess this form is what Ash's Rockruff will evolve into in the anime. I wonder if the show is taking a cue from the game or if it's the other way around.
A

Lycanroc Dusk looks pretty cool. I can see the tuft of fur from Lycanroc Midnight on its back and the main appearance of Lycanroc Midday... its like a cross between the two?

I meant I wished the Dusk Forme was more Midnight-Style. It's just a recolour of Midday with more mane fluff. Also, Ash's Lycanroc should have evolved to the Midnight form. It missed out on the signature move and got pretty bad stats. So it'd be better if that was the Lycanroc. I think Game-Freak failed. Personally, at least.

Staff member
Administrator
It's not a recolor though - it's an intermediate. The body style is similar to Midday Lycanroc, but the mane shape - including the ridiculous over-head spike - is clearly modeled after Midnight Lycanroc. The body color is an intermediate between Midnight Lycanroc's dark red and Midday Lycanroc's light brown, and in case you've seen the clip from Pokenchi (not sure how long this link will survive given the Japanese' tendency to witch-hunt content on youtube) that revealed the thing - in at least one of its animations, its eyes do the red glow thing that Midnight Lycanroc's eyes do.

Personally, I never liked Midnight Lycanroc - I find Midday's more natural canid form to be much nicer looking than the ridiculous cartoon animal monster aesthetic Midnight has (Putting the "Edge" in Stone Edge, much?) and I feel that between Accelerock/Quick Guard (which only Midday gets - Midnight gets Counter and Reversal instead) and the better speed (quite frankly, in Aslowla every bit of speed helps and the slight boost to defenses and HP isn't enough to save Midnight Lycanroc from getting its edgelord tail handed to it on a silver platter) Midday Form is vastly superior in every aspect (except arguably Midnight Lycanroc's hidden ability - Stone Edge with No Guard seems like a fun combination assuming the thing isn't horribly murdered before it can get the move in). Which is honestly the only thing that concerns me about Dusk Lycanroc - what are its stats going to be like? If they try to make -those- an intermediate between Midday and Midnight too, they're going to end up with something that is just Better Than Midnight But Worse Than Midday and make it basically pointless. >>

Then again, that all depends on what it gets learnset-ways. Would be interesting to see more information.
Last edited: Aug 7, 2017
U

I like the concept but the design is a bit lazy. It'a really just a Midday Lycanroc reused model but orange and with more spikes. I was really hoping for a more unique design

I hope Ultra Sun and Moon gets some more news soon, and I really hope it's a sequel like BW2 and not just a third version.

When I seen it I didn't have much of an opinion on it. Personally I thought Lycanroc was fine with just 2 forms. Im probably going to get this in ultra sun tho considering I didn't get midnight form in moon.

Overall, I'm kind of torn about the Dusk Form. While I like the overall concept of this design (a hybrid of the two Lycanroc's that's based on the green flash that appears at sunset) and the fact that it's my favorite color, I kind of wish they gave it a few more minor aspects of the Midnight form such as smaller tail or slightly bulkier front legs so it doesn't look too similar to the Midday Form.

Another dog. Sweet. I love it.

The orange is kinda bright, although I do like the concept of an intermediate stage. I guess the color is in-between Day and Midnight Lycanroc's base fur, but on its own it seems very circus-peanut-y lol. Wish it had more Midnight-form traits but I guess we'll have to wait to see it in action.

The hype! This hype!! Lycanroc is one of my favourite Pokemon, and I'm so happy Ash's Rockruff evolves into this!

Man, this Lycanroc form outta bring the others to ASHes.

My opinion on this thing's design seems to be common - it just looks a little too much like a recolour for my tastes. Still, I do like the orange and green eyes a lot, even if it reminds more more of dawn than it does dusk, and it's always nice to see new Pokemon.
E