Staff member
Administrator
Additional information (as well as new official art) has surfaced in regard to the new Dusk Form of Lycanroc from a CoroCoro leak and a new Japanese promotional video. 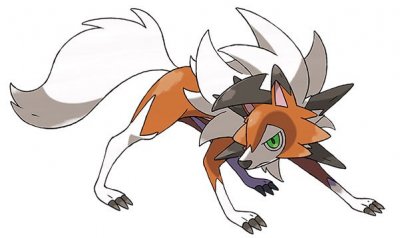 ​
Like the other Lycanroc forms, this one is pure [type]rock[/type]-Type. Its height is 2'07'' (0.8 m), its weight is 55.1 lbs (25 kg), its ability is Tough Claws and it gets both Accelerock (Midday Lycanroc's signature move) and Counter (a move that Midnight Lycanroc learns but Midday Lycanroc doesn't).

The new information also provides final confirmation that Dusk form Lycanroc is an event Pokémon only, akin to Ash-Greninja (and with the same reasons for existing, to be perfectly honest). Dusk Lycanroc cannot be found in the wild and no wild Rockruffs found in Ultra Sun and Ultra Moon can evolve into Dusk Lycanroc. The only way to obtain this thing is by evolving a special event Rockruff that will be distributed over the Nintendo Network between November 17, 2017 and January 10, 2018, for Ultra Sun and Ultra Moon only (obviously).

The video below is the Japanese promotional video introducing Dusk Lycanroc - both regarding its game and anime appearances.

I'm getting this thing asap and naming orange wolf

So it's another unique to Ash kind of form, how surprising.

Oh wow, it actually lived a Hammer Arm. I hope this'll get it higher in the competitive format.

Staff member
Administrator
More or less, except it's an actual honest-to-dog evolution as opposed to a Mega Evolution-esque dealie. XD

I have mixed emotions. On the one hand, I love how it looks and the fact that it gets Tough Claws for an ability (and I have a feeling its stats will find a good balance/ blend of Midday and Midnight Forms). But on the other...I really don't like that this is another event thing. I was hoping it'd actually be obtainable in-game through some method and not an event gimmick, but I guess Ash has to be a special snowflake once again.

Ah, well. Either way, just going to have to grab mine at the first chance available and never let it go.

This is cool, but you can only get it through an event, so that's kinda disappointing.

Gonna get this when it comes out...not my favorite thing but I haven't used rockruff or lycanroc yet so this gives me a chance to give it a try.

He's totally mine. I'll call him Dusky. He shall be my Dusky. He's totally gonna be my Ace! He looks so awesome!

If we wanna go on time, I'm gonna name him Twilight.

I like it, but I'm only gonna name him Dusky because of his form.

I think he's Twilight Form Lycanroc, that's why I'm calling him that. I don't believe in Dusk form.

Honestly, I'm with @Crunchy-Cucumber here, lol. I'm naming getting this guy and naming him Fanta. The fact that Fanta is my favorite soda helps.
E

I'm thinking of naming him Cheeto. Or Dorito.
I don't even like chips tho
I can't even eat most of them (being vegan suuuckks sometimes)

I could never be vegan, personally. But hey, good on you for being one. That takes restraint that I could never pull off.

Apparently vegans live longer, but I'm in it to help animals.

Though once a year, I get to cheat and eat dairy. I feel like scum when I do it, but I can finally eat oreos and milk.

I really wish this things color scheme was more like the Midnight Forms to make it look less like Midday Lycanroc.

im going to steal someones name for this. "Dorito Dawg"


OMFG I LUV IT

I feel like a form like this being exclusive to Ash is making him seem even more like a Mary Sue. Anyone remember during the Indigo League when he was just a normal trainer like everyone else?

Anyways, I'm somewhat curious to see how he'll do in battle and with my team. My Lycanroc in my Sun Playthrough was extremely useful and I wonder how this Orange guy will fare.

I'm hope I won't be to late for this thing, every time there is something cool in an event or something I miss it!! (Except for tapu koko)