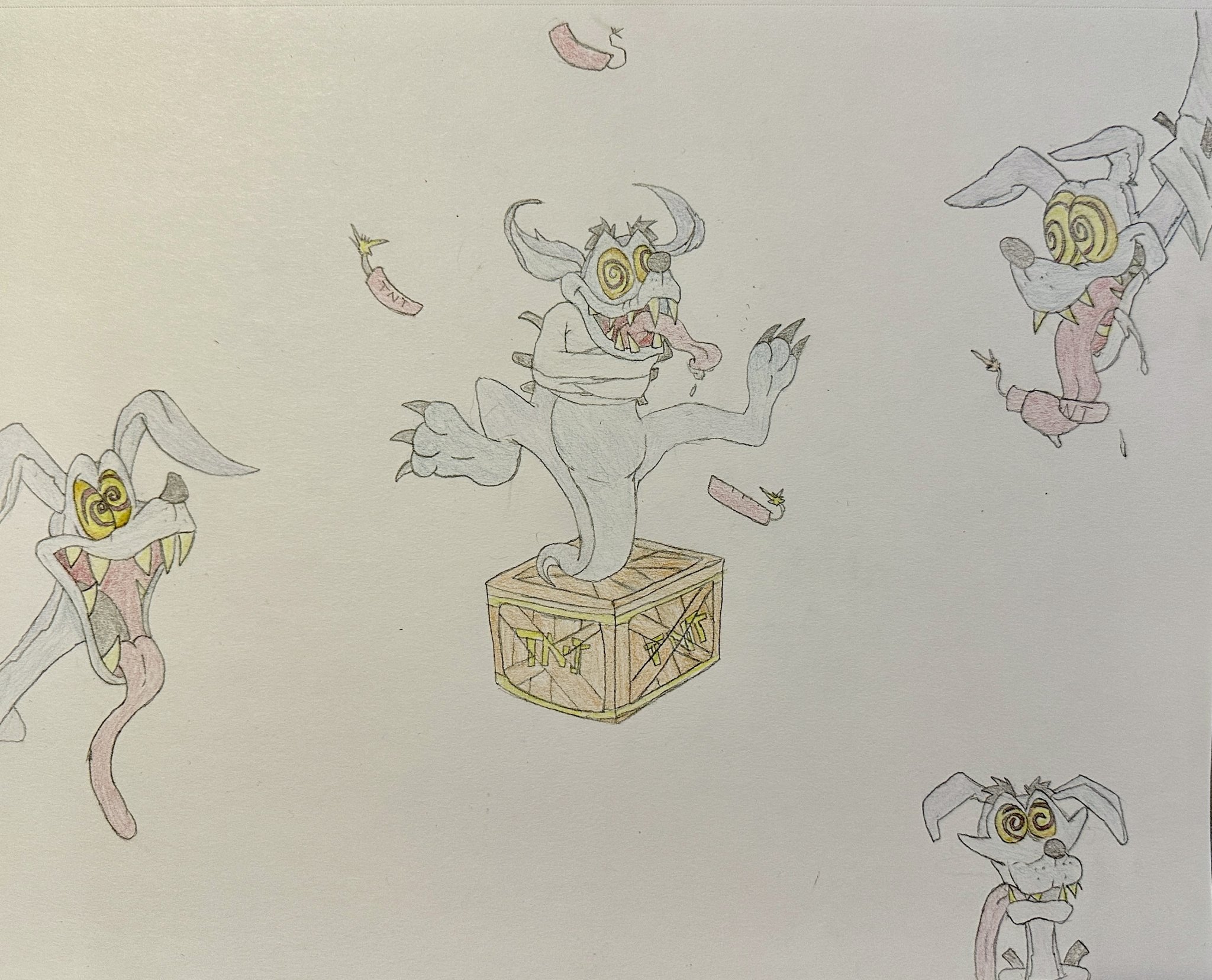 One of Doctor Cortex's many experiments. Ripper Roo was deemed a colossal failure due to losing his mind in the process, and was given a straitjacket and eventually abandoned. This didn't stop this deranged kangaroo from having the time of his life with his new abilities!

Bouncing around like a cartoon, Roo cackles wildly as explosives appear almost from nowhere. Whatever this demented creature touches seems like it could make it explode! Last thing you'd expect is for this elastic psych ward patient is to vomit up sticks of TNT! 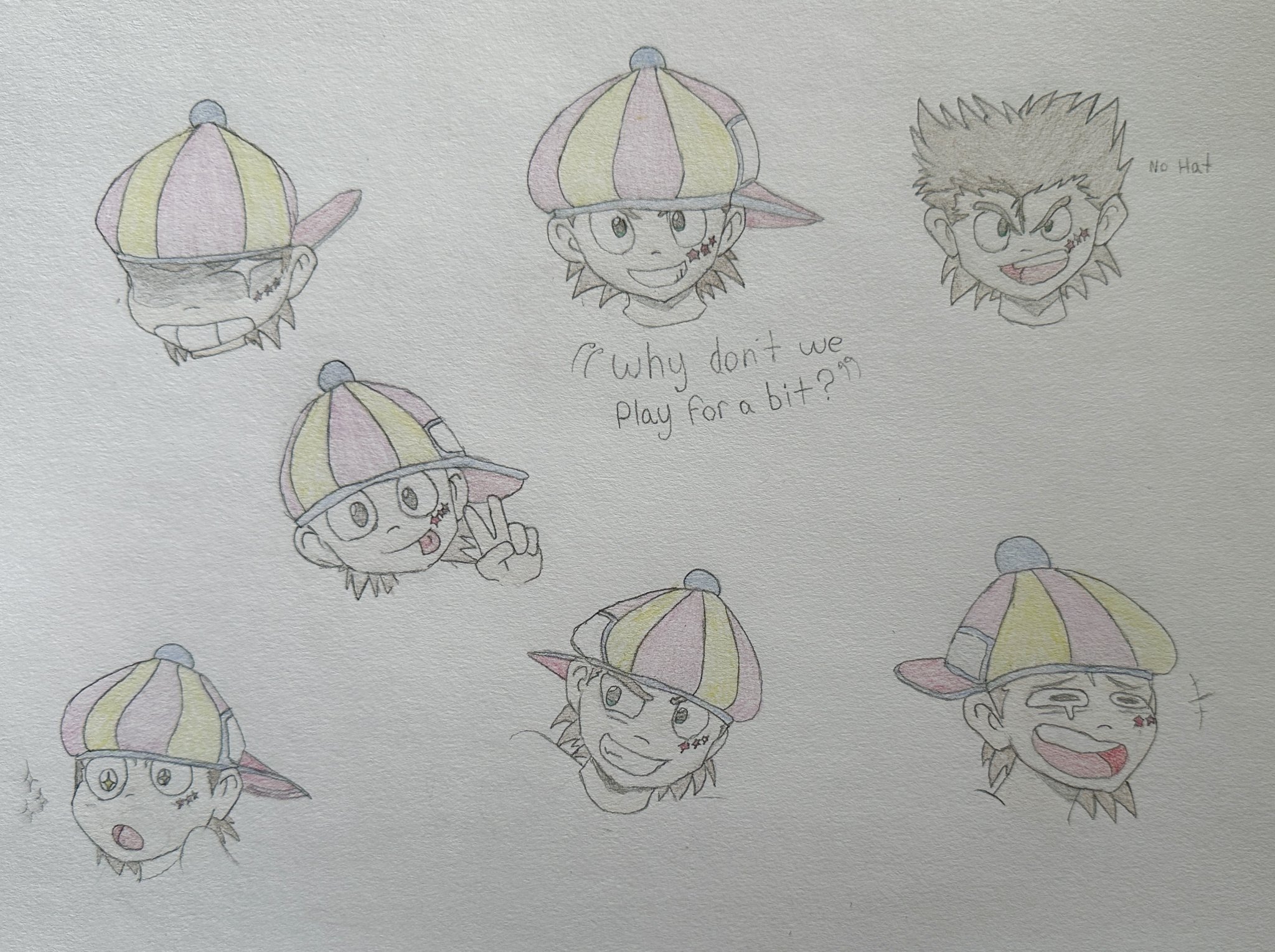 Some expressions done with the troublemaking little demon Rinku! 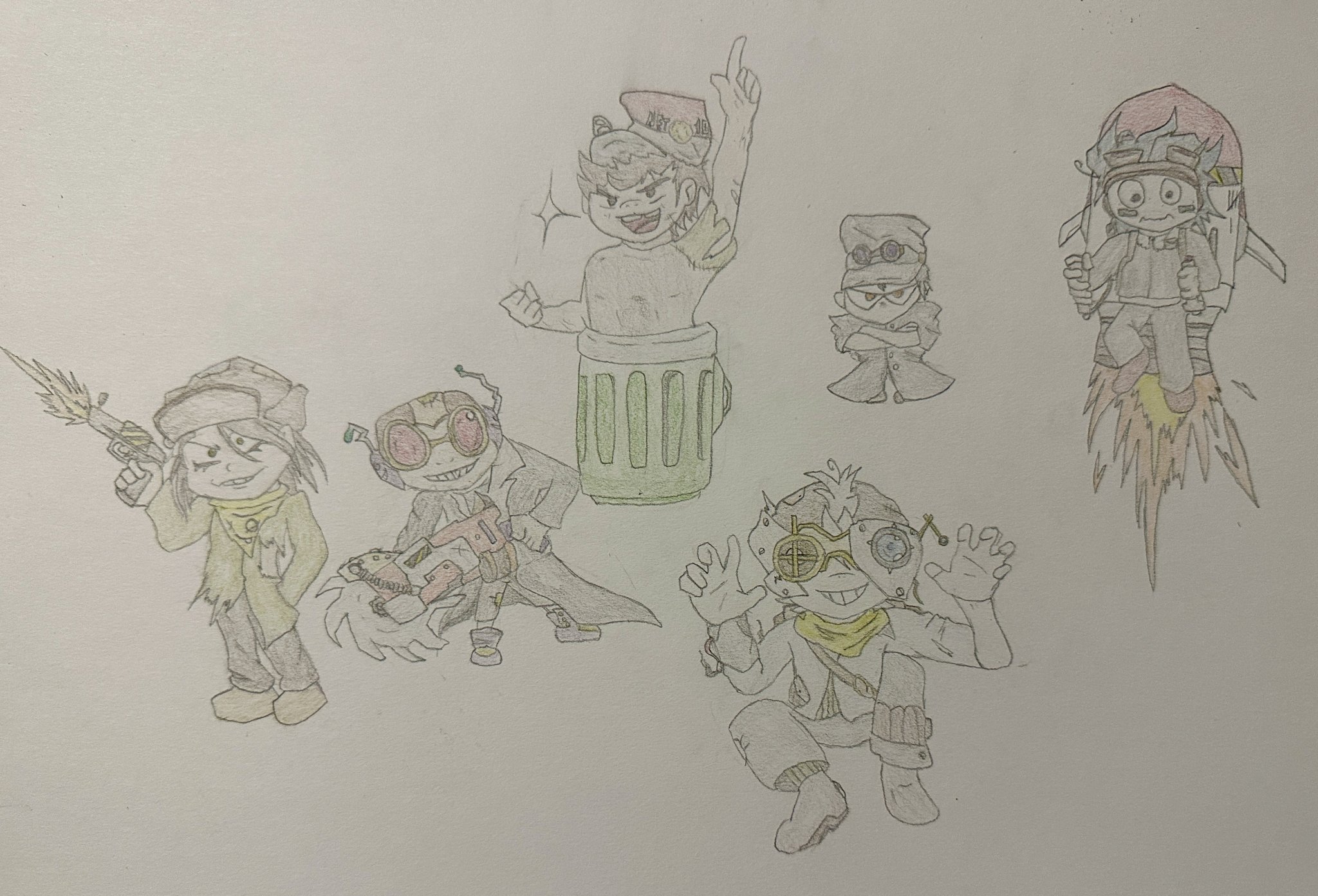 A special core of scrappers, operating under Prince Percy's Trash Kingdom. They are a special operations team that fill important jobs he needs them to carry out, practically his right arm. They consist of tinkering youths that have mastered a specific facet that slots them perfectly on the team. Together, all their expertise comes to a head, proving to be difficult to deal with. Forming the perfect raiding team, the last thing you want is to be jumped by these guys!

Libby barks the loudest and fights fast and deadly. She wields her infamous 'Whirly Birdies', which are heavily modified pistols. Her modifications have turned them into pseudo energy weapons, coating the bullets in energy before blowing them out the chamber. She loves going in guns a blazin' and mouth a cackling.

She and Radio Jack go way back, having been dating for years and have been robbing for the sake of it, just to watch the reactions. When the law caught up to them, Prince Percy saved them in the nick of time. Moved by this and the opportunity they were given, they were brought into the fold as elite Junk Chuckers.

Radio Jack is a rather sinister kid, finding great joy in stealing from others and ripping property to shreds. Using his signature weapon, 'Jagged Jaws,' he can slice through metal with ease, his favorite trick being sawing off car motors while the car is still moving!

Using his heavily modified headphones and goggles, he can track radio signals and sense electronic signatures. What would normally be jumbled noise to others, he can differentiate and find exactly what they were. He claims to be able to find anything electronic device.

The head of the Junk Chuckers, Scud is a stocky kid, boisterous, and incredibly loyal to Prince Percy. He is brash, and crude, not afraid to call out anyone they have issues with, even if they have power levels much higher than the squad. The way he throws his weight around and knows the inner workings of the system put himself as a natural leader.

He is a brilliant engineer...even if he is illiterate, found tinkering in his workshop often. He places a lot of his creations inside of his trash can, where they are obscured from view. His assortment of deadly tinker toys prove to be surprisingly difficult to deal with, being rigged to explode, maul, and pester foes.

Lowest ranking member, and the errand boy of the Junk Chuckers. He has a screw loose in his head, and so is a bit unpredictable, being incredibly unnatural in his movements. He is rather dopey, not understanding social cues or norms, typically getting incredibly close to people's faces.

He's on board the Junk Chuckers for his amazing identification skills. His lenses can help magnify objects and help him analyze weather the loot is useful or not, and what it could be used in. He also has unnaturally high perception, being able to identify threats before most have perceived them. Of course, this hasn't stopped him from becoming the butt of everyone else's jokes in the squad.

Unlike the others - he has no signature weapon. Instead, he has whatever he's gathered at the moment and his odd fighting style. He is heavily evasive due to his sharp reaction time, bending and shifting in ways people wouldn't expect. He fights in ways he considers fun. Even when he has a kill shot, he rather trip them or pull down their hats over their heads, laughing like a buffoon as he makes a fool of them.

A mysterious one that was experimented on by a shady organization. Having broken free of containment, he fled to the sewers, where the Trash Empire took him in, giving him a place of refuge. In exchange, they elected to use his newfound abilities to benefit the kingdom.

The experiment he was subjected to enhanced his physical body tremendously, allowing shocking displays of power and agility. However, his body's cells begin to age back the more his exerts his power. As of late, he's used it to the point where he looks far younger than his age. The subject of the experiment he was subjected to was immortality, and evidently, it worked...in a fashion.

A rather jittery, clueless kid that has a knack for engineering. Namely creating large machines, designing a few of the gadgets the other members use. He gets intimidated fairly easily, thus doesn't stay in combat for too long, especially when enemies get too close.

Turbo is famous for his massive thruster he has strapped to his back. While it does allow free flight, it is in fact, a repurposed warhead which was never disarmed. So there's always the risk of premature detonation. He keeps a tally of how many times he's crashed it, etching it onto the missile. The missile itself has a few secret compartments filled with nasty surprises that allow him to fight without getting close.
Last edited: Jan 13, 2023 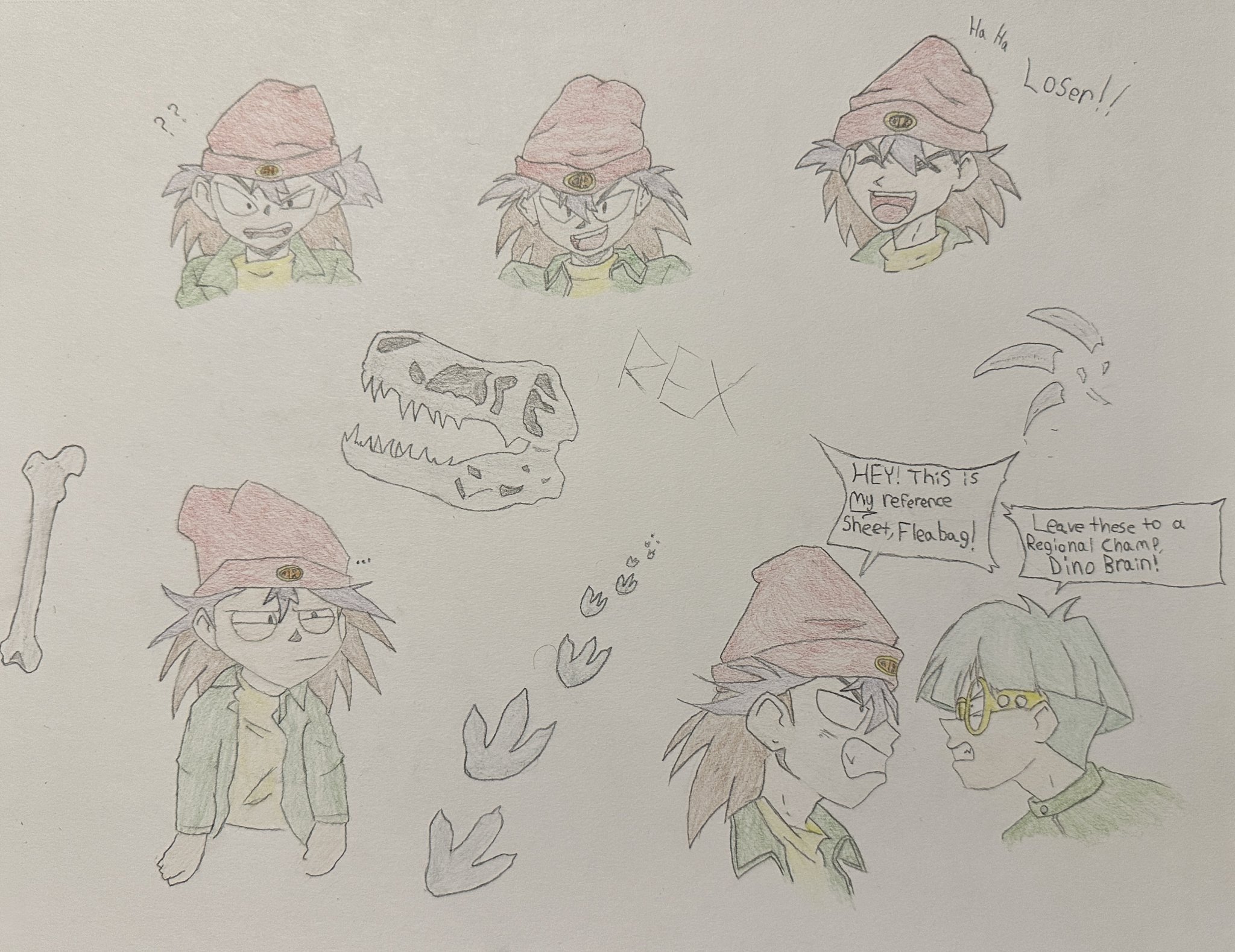 Got bored so I decided to play around with Rex's faces and expressions. Why draw new characters if I can just draw the same one in different ways five times? Lol 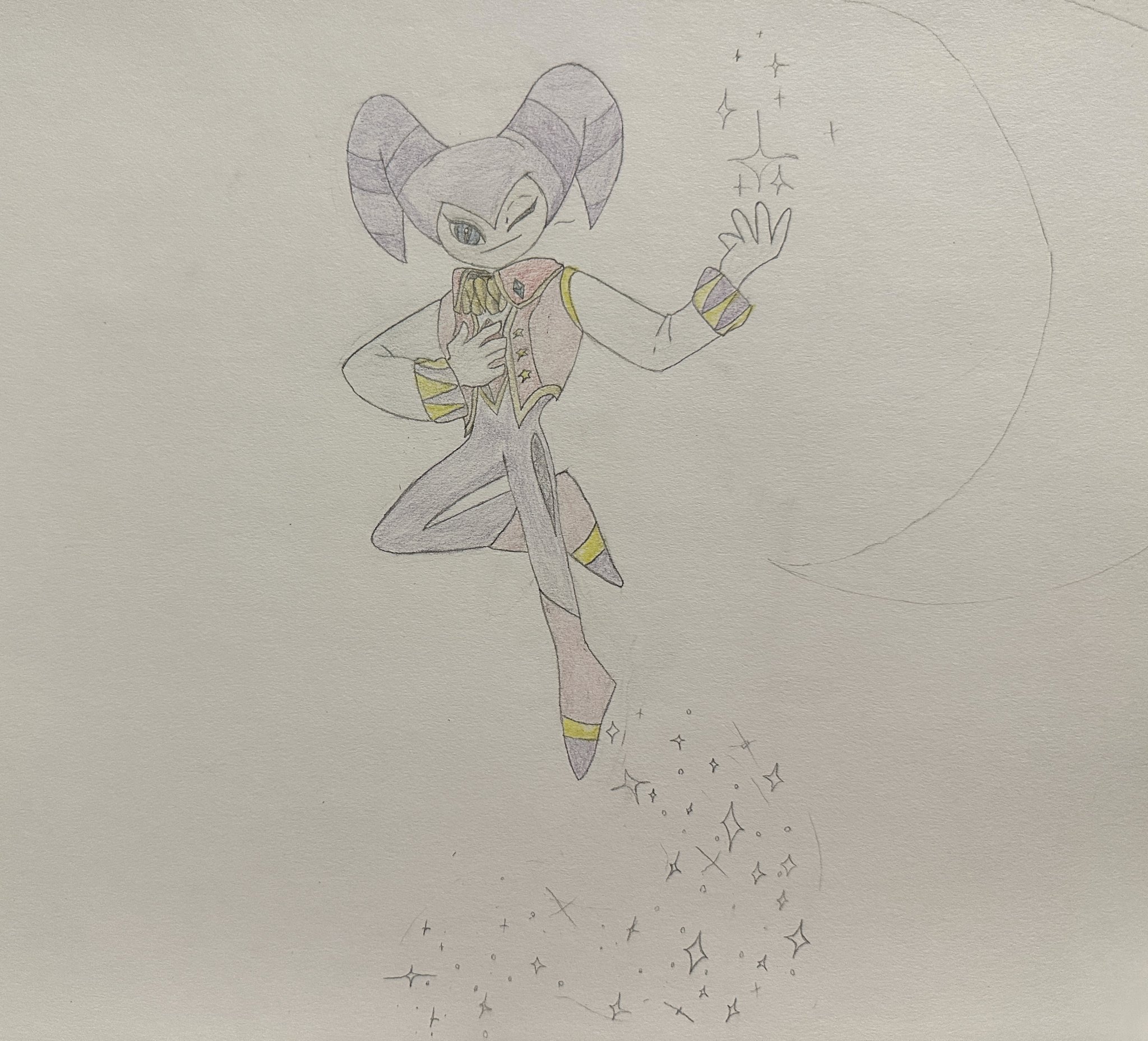 Once one of the top Nightmaren, NiGHTS had a rebellious spirit, breaking out of their bonds and flying free into the midnight. They live a carefree lifestyle, hopping from dream to dream and living within the sleeping minds of people everywhere. They takes things as they come, and loves entirely in the moment. However, if a nightmare were to set in, they wouldn't let it stick around for very long if they had anything to say about it!

Having a kind yet mischievous heart, NiGHTS isn't aligned with good or evil, but can't stand a bully when they see one. Capable of free flight, they don't let a care in the world get to them as they acrobatically soar through the air, almost dancing through the daze of the dream sky.

If they were to get into a scrap, they could spin their body like a drill and burrow right through enemies at high speeds! Their second most famous ability is the Paraloop, an attack that allows them to make a circle around a foe, and when that happens, causes extreme damage to them, or teleports them to who knows where.
Last edited: Friday at 5:54 AM
Share:
Facebook Twitter Reddit Pinterest Tumblr WhatsApp Email Share Link
Top