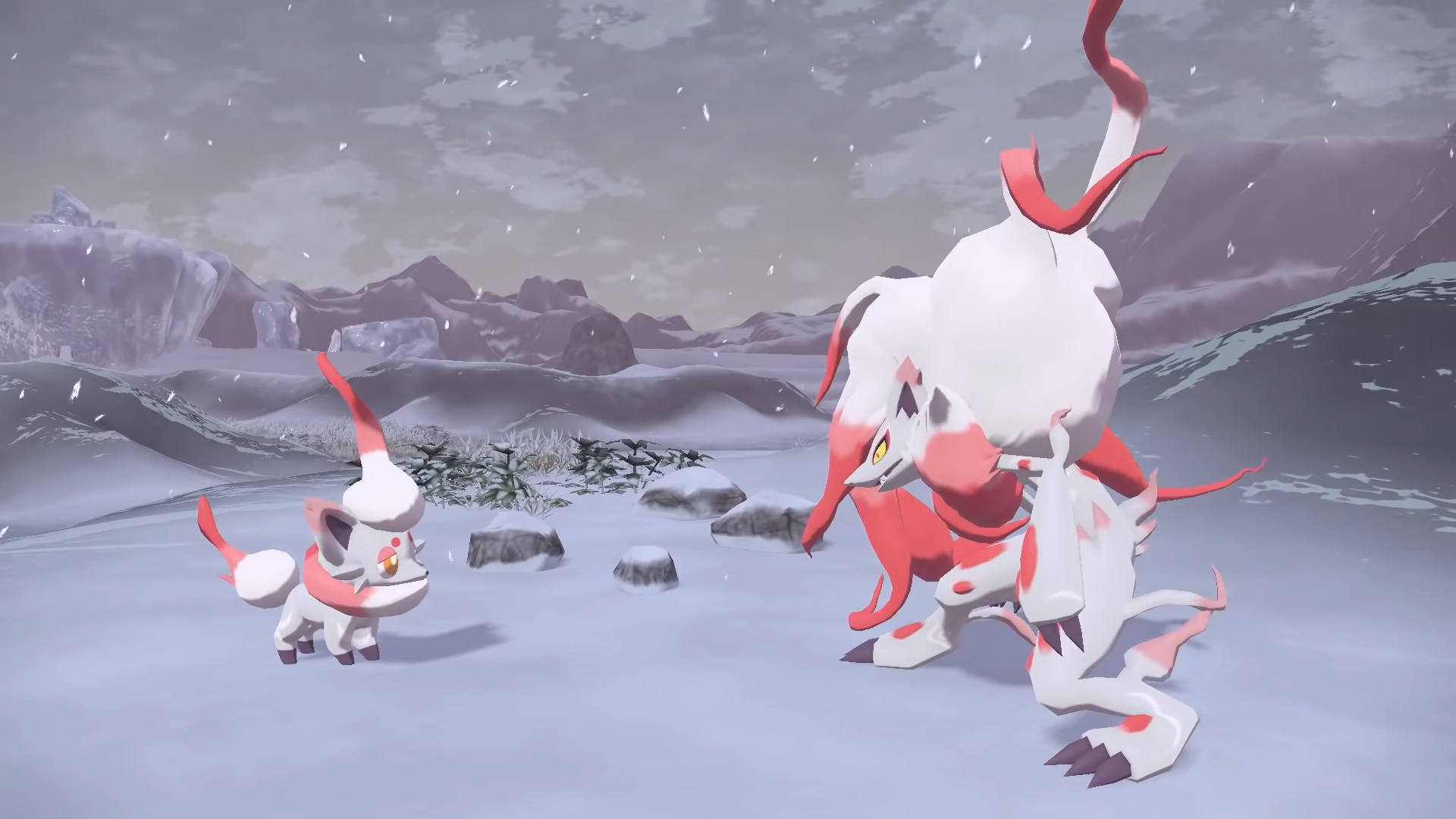 ​
After their two-part reveal last week, the new Hisuian forms of Zorua and Zoroark have been fully announced in a new trailer for Pokémon Legends Arceus. This new trailer, as well as a new one for Brilliant Diamond/Shining Pearl also reveals some additional bonuses for picking up the games within their launch periods. 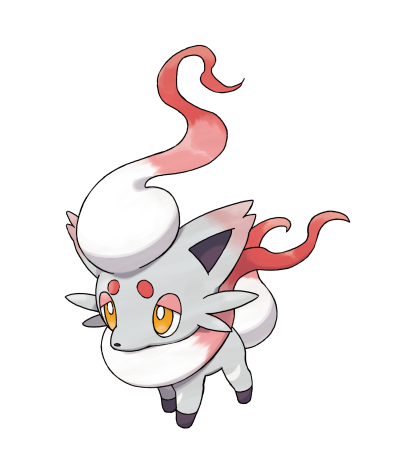 
Reborn as a Ghost-Type Using the Power of Spite
These Zorua migrated to the Hisui region after being driven from other lands by humans, who shunned the Pokémon for manifesting uncanny illusions. But the Zorua perished, unable to survive the harsh Hisuian environment and strife with other Pokémon. Their lingering souls were reborn in this Ghost-type form through the power of their malice toward humans and Pokémon.
​
Disguising Themselves and Feeding on Targets’ Terror​
If Hisuian Zorua spot a lone person or Pokémon, the Zorua may appear before them in a guise mimicking the target’s appearance. Unlike the illusions of the previously discovered form of Zorua, these ghostly mimicries are created using spiteful power emitted from the long fur on Hisuian Zorua’s head, around its neck, and on its tail.​
​ 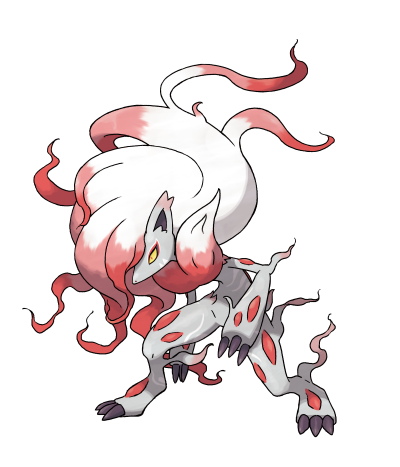 Hisuian Zoroark
Category: Baneful Fox Pokémon
Type: Normal/Ghost
Height: 5'3" (1.6 m)
Weight: 160.9 lbs. (73 kg)
​
Cursed Illusions Erupt Forth from Its Voluminous Coat
The spiteful power emitted from Hisuian Zoroark’s long, writhing fur projects terrifying illusions—and can also inflict physical harm upon foes, damaging their bodies from both inside and out. And the illusions that Zoroark projects have expressions of such utter malice toward every last thing upon this world that those who see them are said to be driven mad by the terror.

A Pokémon with an Unexpected Soft Side
Hisuian Zoroark is ferociously hostile and aggressive toward people and other Pokémon. But it appears to have a compassionate streak for those it considers close or like family. 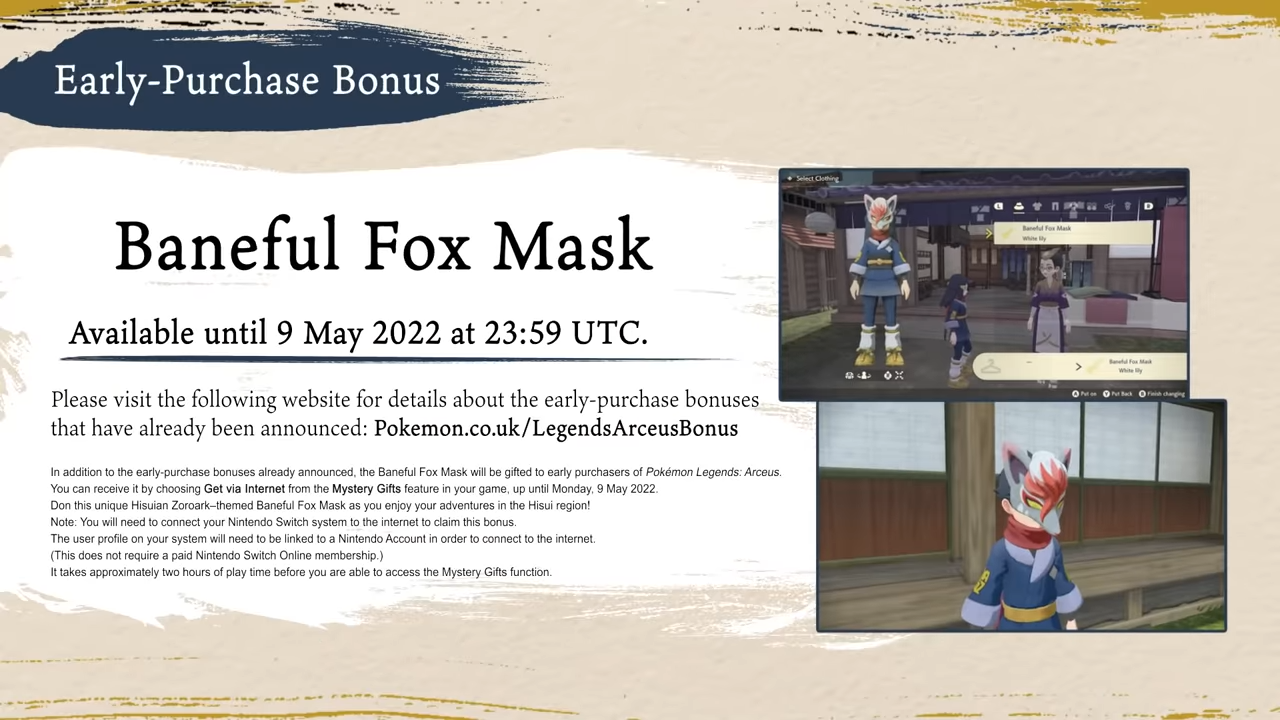 ​
The 'Baneful Fox' mask based on Hisuian Zoroark will also be distributed as a free early purchase bonus for all players through to the 9th May 2022, alongside the previously announced Hisuian Growlithe inspired Kimono set. Both will be available through the Mystery Gift feature.

Purchasing the Digital Version prior to the 9th May will also earn you a Mystery Gift code to receive 30 Heavy Balls. 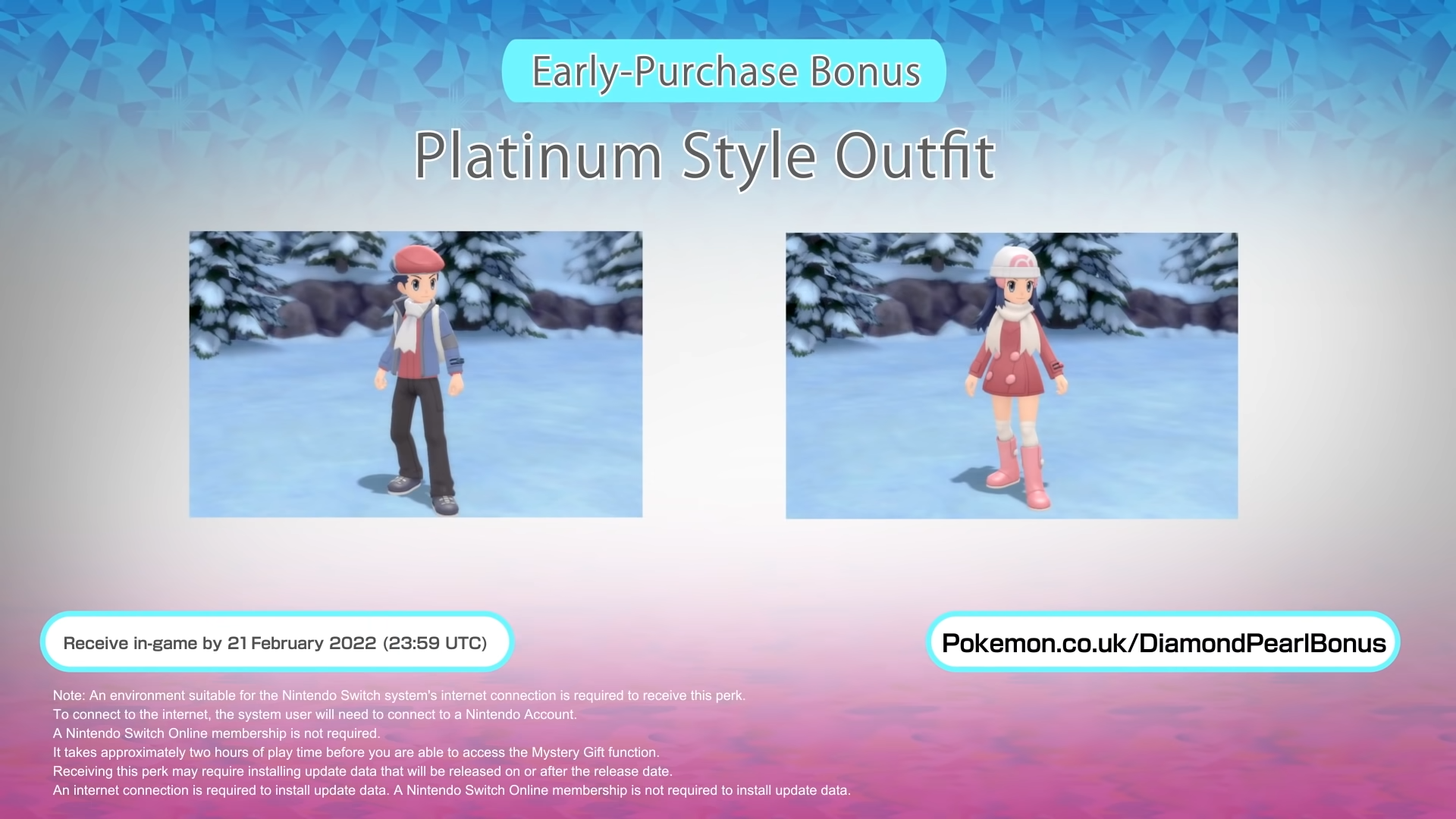 ​
The latest Brilliant Diamond/Shining Pearl trailer, meanwhile, showcases some of the later Gym Leaders of the game, Team Galactic and the Lake Trio Pokémon. Purchasing these games prior to the 21st February 2022 will also net you outfits based on Dawn and Lucas' Platinum look as well as a Manaphy Egg, both available through Mystery Gift.

Purchasing the Digital Versions prior to the 21st February will also net you a code for 12 Quick Balls.

Time to preorder some games

I should get about doing that as well, didn't realize how soon it'll be until the Sinnoh remakes.

And when Pokemon Legends is out, that Zoroark's definitely going in my team.

Definitely getting Brilliant Diamond! Buying it ASAP to get those Platinum Outfits