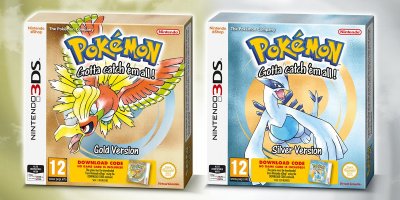 ​
It has been revealed today through the Nintendo of Europe Twitter account that the up-coming eShop release of Pokémon Gold and Pokémon Silver will also have a physical release in Europe.

The two games are set to release on the 3DS' eShop on the 22nd of September and these physical editions will release on the same day. They come with a download code for either Pokémon Gold or Pokémon Silver (depending on which version you purchase), but otherwise it has yet to be revealed if there are any other extras included. It's also unknown how much these editions may cost compared to the eShop release.

It's worth keeping in mind that packed versions being released in Japan include stickers, a poster and a cartridge shaped-magnet, so there is every chance we'll have something nice in our editions too.

Crud, I can't play Gold or Silver because I live in 'Merica. @Demelza , is there any news of this dropping for North America?

BeastBoyLucario said:
Crud, I can't play Gold or Silver because I live in 'Merica. @Demelza , is there any news of this dropping for North America?
Click to expand...

None right now. I'd be surprised if it didn't happen, but I guess wait and see.

That's good news, then. I haven't played through Johto, and I think it'd be fun if I'd be able to!

BeastBoyLucario said:
That's good news, then. I haven't played through Johto, and I think it'd be fun if I'd be able to!
Click to expand...

Even if you don't get the packed version in America, you will still be able to get the games off the eShop.

But would that be a demo version or the entire game is my question?

BeastBoyLucario said:
But would that be a demo version or the entire game is my question?
Click to expand...

It's the whole game. You don't even get a cart in the box – you just get a code, which you enter into the eShop to get the game download. The game you download with the code is literally the eShop version – this physical release is just a special collector's edition.

That's great to know! Time to search for codes!
E

Well if this come. To america i so would like to buy them

Well, now the price will drop on actual packaged ones due to the code. Like it has for Red Blue and Yellow. You can get all 3 (red, blue, and yellow) for about 20 bucks on average. Hell, I saw a pack of Red, Blue, Yellow, Gold, Silver, and Crystal for only 50 dollars.

Damn those look really nice... If there's enough cool stuff with them I'd honestly consider it. If not, I'm still hyped for these to be released on the eShop.

Staff member
Administrator
Despite having very little love for Gold & Silver (Crystal's where it's at~), I'd be mighty tempted to pick up one of those packaged releases if (a.) they actually do hit North America and (b.) they contain all of the goodies that the Japanese boxes do. I'm a sucker for Pokemon merchandise.

Can't wait for this! I love the second gen and I never did get to play Heart Gold (or the original ones) perfect chance to do so.

OH wow I absolutely LOVE g/s but I don't have a 3DS which rlly ruins my day, everyday LOL

Oh crap, for a second I thought these were remakes.

What Did You Do To Snoke?

Why are they in a box if it's just a code?

JohnsonAce said:
Why are they in a box if it's just a code?

#Johto is coming to more recent games!
Click to expand...

Maybe there's gonna be some other stuff inside as well?

JohnsonAce said:
Why are they in a box if it's just a code?
Click to expand...

It's a little strange but this way collectors can display the box, and you could also package it up as a gift for a friend or a kid. I prefer ephemeral goods after packing up house and moving a few times (

) but a lot of people like that tactile presentation.